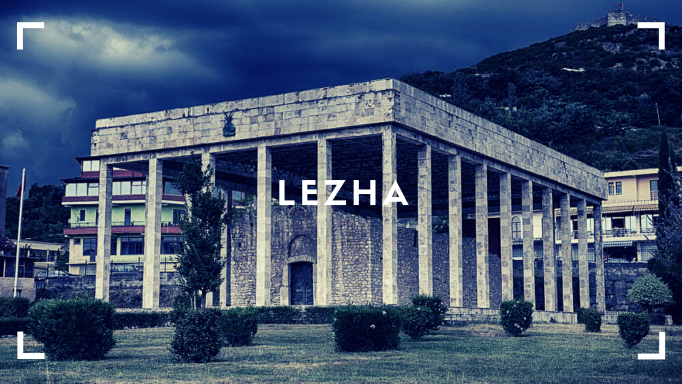 Lezha is a city in north west of  Albania. One of the main strongholds, the earliest of the fortification walls of the city are of typical Illyrian construction and are dated to the late 4th century BC. The city was one of the main centers of the Illyrian kingdom. During the conflicts with Macedon it was captured by Philip V becoming the Macedonian outlet to the Adriatic Sea. The town was later recovered by the Illyrians

Lezhë Castle is a castle dominating the city of Lezhë, northern Albania. Its highest point is 186 meters. Lezhë Castle is at an elevation of 322 meters. The castle originates from Illyrian times. In 1440 it was reconstructed by the Venetians, and in 1522, after the Ottoman conquest, it was also rebuilt by the latter. The castle bears traces of Illyrian, Roman, Byzantine and Ottoman architecture. Interesting places to visit are the ruins of the Ottoman buildings inside the castle, the mosque, the tower of the south-eastern wall with a Roman arch, and the Illyrian tower on the southern wall. The Lezha castle is a cultural monument. The castle offers a beautiful view of the Lezha fields and the Adriatic Sea.

Skanderbeg Memorial is the place where on March 2, 1444 the “Treaty of Lezha” was held and where on January 17, 1468 the national hero Gjergj Kastriot-Skanderbeg was buried. It has been a cult object that has been used as a church and mosque in various periods. This building that belongs to the 14th century is of the basilica type with a length of 17m and a width of 8m. On its walls is a fresco of St. Nicholas. According to legend in 1478, the Turks who conquered Lezha, destroyed and opened the tomb of Skanderbeg and it is said that his remains were taken by soldiers and who wrapped them in gold and silver to use as a talisman for invincibility in battle. Skanderbeg Cemetery is one of the most important monuments in the history of Albania. In addition to the church walls in this building there is also the apse where the bust of Skenderbeu, the fresco of St. Nicholas, the windows and the three arches above the church door are located. On the walls are hung 25 bronze shields which show the 25 main battles of Skanderbeg. In the center of the cathedral, below the site that synopsis the tomb of the national hero, is another church and a stone sarcophagus that have not yet been displayed to the public. It consists of two rows of antique stones of considerable size, placed in a rectangular shape and connected with lead. The lower part of the sarcophagus made of marble according to the typology of the monumental tombs must have been positioned in this space. It is located on an object of the Roman period (II century BC). The object is preserved in a covered room and has remained so since 1980. The secret underground chamber remains a mystery that has not yet been discovered, and continues to be the curiosity of many historians and archaeologists.

It is located in time zone Central European Summer Time (for standard time).It’s population is 8.091 residents, according to 2011 latest census. Shëngjin postal code is 4503, so for sending postcards to your partner from Shëngjin you can use the code as described.Shëngjin meters above mean sea level, basically meters above mean sea level (MAMSL), is under 0 meters. For this reason it is an ideal place if you and your family want to do a trip near the sea.There are rivers, lakes or sea around Shëngjin. Bodies of water like Adriatic Sea, Gulf of Drin are a must when you like destinations with near water bodies.