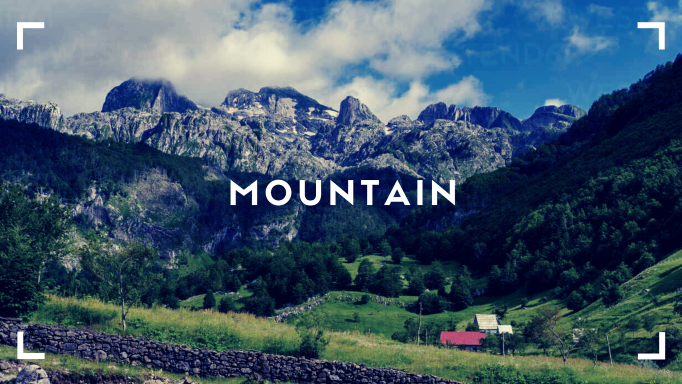 Mountain tourism is a recreational activity which is expressed in the temporary mental and physical rest of man by visiting and staying in mountainous areas and regions. The main factors that influence the development of mountain tourism are natural beauties, climate suitable for human health, mountain reliefs, biodiversity, diverse landscapes, mountain lakes, thermo-mineral waters and interesting sources of natural water.

Albania can also be proud of mountain tourism, which is also preferred by foreigners. The area of ​​Thethi is considered for many tourists one of the most beautiful mountainous parts in all of Europe.
Thethi with the view in front of the Albanian Alps, 70 km from the city of Shkodra, surrounded by a mountain range, from the mountain Radohimë, Shenik, Papluk, with an altitude of over 2500 m, lies the high valley of Thethi, one of the most special areas of these Alps, 750 to 950 m above sea level, with an area of ​​2630 hectares.

Protected by the walls of majestic mountains, paved with meadows, beech forests and cold water springs, the mountainous tourist area of ​​Thethi turns Albania into a potentially powerful place for mountain tourism in all seasons.

The natural resources of this area are related together with the cultural and historical heritage of the local inhabitants, thus forming the most important bases for the development of tourism. Harap Cave and Bira e Rrathëve, which with their size and interesting phenomena that carry within them such as underground lakes, galleries, siphons, etc., have become the cause of many legends created by the inhabitants of the area. A natural beauty, special, of the northern mountains, unfolds in this area Thethi Waterfall with 25 m height.

The clear water of the Valbona River, the beautiful natural environment and the tranquility make this area very attractive for holidays. Almost the entire 51 km of the river finds vacationers, who not only cool off in the clear water, but also hunt the rare trout of Valbona.

Valbona Valley is the most visited tourist area in the district of Tropoja, even one of the most visited in the Albanian Alps after the Thethi valley. This area of rare beauty is preferred not only by local tourists but also by foreign tourists, who prefer to get acquainted with the customs or traditions of the northernmost villages of the country. There is no real hotel in Valbona, but some characteristic tower houses have been adapted according to tradition in hotels for tourists.

Qafshtame National Park (also Qafë-Shtamë) (Albanian: Parku Kombëtar i Qafshtamës) resides in the edge of the mountain chain north of Tirana, about 25 kilometers east of Kruja. The park is named after the Qafë-Shtamë passage, and has an area of 2000 hectares, with a beautiful mountain scenery consisting mainly of pine forests, some small lakes and major water sources. The national park was established in 1996 by the Albanian government. It is becoming lately a popular attraction for hiking.

The park’s name translates as pass Shtama. The road from Kruja to Burrel, runs through the park, on an altitude about 1250 meters.

North of the pass road, the majority of the park is mostly undeveloped mountain land with forests, in which pine trees, and oak dominate. The black pines are up to 20 meters high and 60 years old—one of the main wood sources in Albania. The forests provide opportunities for retreat for brown bears, wolves, foxes, and various birds,actually being endangered from illegal deforestation.] The highest points on which it rises steeply from the Pass to the north, are the Maja e Liqenit (1724 meters) and the off peak Maja i Rjepat e Qetkolës ( 1686 meters). Maja e Liqenit should not be confused with the peak with the same name in Sharr region of Kosovo. In the southeast, the park is adjacent to the Dajti National Park[6] and in the southwest to the Kraste-Verjon Protected Landscape.

The Llogara National Park (Albanian: Parku Kombëtar i Llogarasë) is a national park centered on the Ceraunian Mountains along the Albanian Riviera in Southwestern Albania, spanning an surface area of 1,010 ha (10.1 km2). The park’s terrain includes large alpine meadows, vertical rock faces, precipices and dense forests. The most area of land is covered by forests and was established in 1966 to protect several ecosystems and biodiversity of national importance.The International Union for Conservation of Nature (IUCN) has listed the park as Category II. The region has been recognised as an important Bird and Plant Area, because it support significant numbers of various bird and plant species.

The park features outstanding diversity with the landscape ranging from the alpine peaks of the Ceraunian Mountains covered with snow in winter to the sunny Albanian Ionian Sea Coast in summer. At 1,027 m (3,369 ft), the Llogara Pass provides a striking scenery, with tall mountains overlooking the Albanian Riviera and several islands in the sea. The region experiences a mediterranean climate. This means that the summers are hot and the winters generally dry to warm to cool. Despite the vicinity to the mediterranean climatic region, an alpine climate prevails at the Maja e Çikës. Geomorphologically, carbonate rocks occupy most of the area, while the mountains are composed of limestones and dolomites.